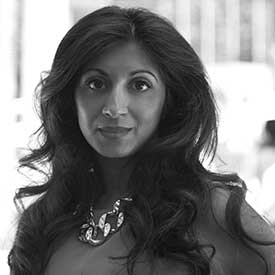 Kirti is the Executive Director of Meraki Executive Search & Consulting Limited and created by the leadership team of Harvey Nash APAC. She has worked in Executive Search for over 20 years. Kirti is the pioneer behind the Women's Directorship Programme, a joint-venture with The University of Hong Kong, a corporate governance programme to help women prepare for board responsibilities. Kirti also leads the Meraki Network, an Executive Women's network in the region and is an active member of the Women in Business Committee at the British Chamber in Hong Kong. In 2015, 2016 and 2017, Kirti was named as one of the Global Top 50 Diversity Professionals in Industry by the Economist Magazine. In 2013, Kirti was featured in the South China Morning Post's annual Women Of Our Time magazine as one of Hong Kong's 25 most inspirational and influential women who have contributed to the city's success over the past year. She is married and has two young children, Roy and Ava.