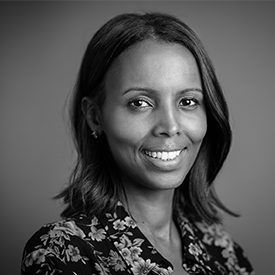 Tasma is an Associate General Counsel based in the Singapore office of Citibank. She advises the multi asset sales, trading and structuring teams of the Markets and Securities Services business. She is also responsible for managing, mentoring and developing a team of 6 junior members of the legal team based in Mumbai.

Tasma previously worked in Citi London in various roles including as a trading desk lawyer advising the equity derivatives and cash equities traders.  Tasma recognizes the importance of technology in her chosen career in law and is a member of the innovation initiative forum of APAC Citi Legal.

Tasma is Somali by birth and British by naturalization. She has lived in 4 countries (Somalia, Kenya, UK and currently in Singapore) and her upbringing in these very different countries, each with its own unique culture has shaped Tasma’s outlook in life. She is driven by intellectual curiosity and is keen to make a difference. She does this through her involvement in sponsoring the education of young girls in Somalia and by her involvement with the steering committee of Citi Women Singapore.

Tasma is a mother to two young children. She is a keen runner, having previously completed the 2012 London Marathon, several half marathons, with her last race being the Angkor Wat half marathon in Cambodia in December 2019.

Tasma has Bachelor of Laws from Queen Mary, University of London and she is admitted as a solicitor in England and Wales.