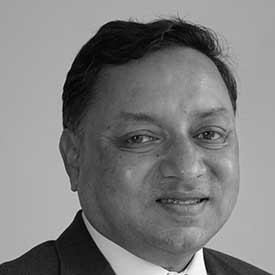 Vikram Subrahmanyam was appointed the Asia Pacific Operations & Technology Head in August 2016. In this role, he is responsible for all of Citi's O&T functions across Asia Pacific including the Citi Service Centres, and is the Citi CIO for Asia Pacific.

Vikram started his career with Citigroup in 1991 in Credit Card Operations in Chennai, India. Over the last 28 years, Vikram has held a number of roles in sales, customer service and product management, as well as operations and technology. In the O&T domain, he has worked across credit card operations, retail banking, cash management, trade services, custody and treasury operations, and capital markets operations.

Vikram has led a number of technology transformations during this time, ranging from the replacement of the corporate banking platform in India, through the retail banking platform in Indonesia, and the credit card platform in Japan. He was a key member of the Securities & Exchange Board of India STP committee which introduced electronic contract notes for the Indian equity markets, and was a member of the Reserve Bank of India Committee on Computer Audits for Banks, which issued a standardized checklist for banks' IS audits. He was also a committee member of the Technology & Operations forum of the Foreign Banks Association of Indonesia. He is presently a member of the Board of Advisors for the SMU School of Information Systems, Singapore